From Then to Now – A Case for Black History Month

During Black History Month in 2013, my wife’s friend, Kora, sent a short Facebook message to my wife jokingly asking, “Does this remind you of anyone we know?” below a picture of Lewis Howard Latimer. Immediately my wife couldn’t help but giggle hysterically, while my reaction was much more on the stoic side. I tried to stave off her waves of incessant snickering with aggressive indifference and the classic, “Well, you look like…” to prevent myself from being the butt of the joke d’jour, but to no avail. So I decided to take my mistaken doppelganger identity case to the general public to prove my wife and her friend wrong. However, the amusement and amazement just kept growing among my friends, co-workers, and even strangers. Some of their responses to Latimer’s picture were, “Whoa! That’s a cool Photoshop picture of you,” and, “You look exactly like your grandfather. It’s your grandpa, right?” I guess the most memorable reactions were the instant laughter from just a quick glance at the portrait. My reaction: deadpan.

Shout out to my wife Dee Azlan and brother Aiman Azlan whose amazing artistic vision put this together.

Rest assured, my facial resemblance to Lewis Latimer is purely coincidental (unless Dr. Henry Louis Gates can prove me wrong); what is not coincidental is his life story. To me, Lewis Latimer is the definitive self-made “can’t tell me nothing” American hero. Born in Massachusetts in 1848 to the son of escaped slaves George and Rebecca Latimer, Lewis joined the U.S. Navy during the Civil War. After his honorable discharge, Latimer worked for the Crosby and Gould patent office as a menial laborer. Latimer’s determination turned his employment into an informal apprenticeship where he learned the art of mechanical drawing through observing and studying draftsmen. Latimer’s uncanny talents led to the creation of improved railroad car toilet systems and the telephone while working with renowned inventors such as Thomas Edison and Alexander Graham Bell.

In short, Lewis Latimer was a self-made man who succeeded despite facing limited opportunities and virulent racism. However, against all odds, he succeeded.

There are many rousing stories of American heroes like Lewis Latimer. However, it has been an uphill battle to fairly incorporate inspirational stories like Latimer’s and countless other stories of African Americans, in the pages of American public school textbooks, curricula, and mainstream history of America. This is where Black History Month has stepped in.

Famous historian Carter G. Woodson created black history week in 1923 to help integrate the fascinating story of Black Folk in the minds of White America, and instill pride in Black People. Woodson’s intention for Black History Week was not an end but a mean: his astute understanding of history led him to the firm belief that creating a celebratory event of acknowledgement and remembrance (i.e. Black History Week) would form a barricade against the front lines of systematic racism. In the popular “Inch-worm Progress” (i.e. the slow and steady pace) philosophy of many African Americans during that time, he believed this foothold against the armies of oppression would eventually create an important breakthrough for the current generation and create opportunities for later generations.

Carter Goodwin Woodson is known as the “Father of Black History”

Woodson asserted that mainstream America did not accept African Americans because of their denial and ignorance of African Americans’ role in creating the country. Essentially, during the time of Woodson, the collective American psyche did not fully acknowledge and understand the vital role of African Americans to the creation of the US and the upholding of her dear ideals that all men are created equal and are entitled to certain unalienable rights to life, liberty, and the pursuit of happiness. But, unfortunately, this problem still exists today. It is outright criminal and inhumane to erase or gloss over these significant contributions. To play a significant role in the creation and maintenance of something so special only to have your contributions dismissed, misappropriated, and wiped clean is de-humanizing and depressing.

Just imagine how you felt during those times at a group work project in grade school, university, or at work and your name was left off the final product (deliberately or accidentally) and your hard work was minimized by your colleagues. Moreover, what if the final product was received really well by the assessor, and he or she does not know anything of your contributions. Apply this to a group of millions of African Americans whose blood and toil went unappreciated, undocumented, and uncelebrated. Give respect and credit where it is due and active participants in group projects and nation-building experiments can build on a healthy foundation.

According to historian Benedict Anderson, modern nation-states (countries) are essentially “imagined community.” In this sense, he means that the hodgepodge of 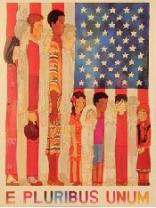 In post-Revolutionary America, Noah Webster and early social engineers diligently collected stories of the young country to coalesce a collective story of America. Documentarians, authors, and storytellers deliberately documented the cultural and historical fabric that made America to show the identity of America – one that was distinctly different from Britain and any other nation. Unfortunately, since then, and still today, the story of African-Americans is not fully a part of the American history. But why is this important to our country?

In the history and present memory of the American public, the story of African American triumphs, struggles, and realities have been systematically undermined, overlooked, distorted, or outright forgotten in Hollywood, school curricula, and public memory in general. (Note: This paradigm can be applied to other disenfranchised communities/groups such as Native Americans, women, and others).  As a historian and a curriculum developer, I have noticed that systematic marginalization of certain groups’ contributions from state-sponsored history books can lead to bitterness, anger, and antipathy towards the mainstream populace and the nation-state the mainstream controls. For example, in recent years, Aborigines in Taiwan have adamantly opposed school textbooks that have utterly disregarded their culture and history.  Aborigine rights groups in Taiwan have struggled and strived to make sure their voice is heard and relevant in the island’s history.

Anti-establishment protests and violent flare-ups are a manifestation of historical marginalization. On the other hand, amends can be made if the histories of previously ostracized groups are included in the stories they helped create.

Dr. Woodson hoped that Black History Week would start a historical journey that would grow in strength and, simultaneously, form a potent antidote to racial oppression and self-hate. It has now been celebrated for a month now with many holdouts, detractors, and skeptics to its purposes. My message to this is this: For there to be no need of a Black History Month, I imagine that that would mean that Black History is seamlessly woven into the fabric of America’s story and reality found in its school curricula and popular media. That would mean that the stories of George Washington Carver, Elijah McCoy and Lewis Latimer could be mentioned alongside Thomas Edison and Maria Mayer without any asterisk or footnote needed. That would mean heroes like Madame CJ Walker, Sojourner Truth, Frederick Douglass, and Zora Neale Hurston are known just as well as many other American heroes. For the celebration of Black History Month to not be needed would mean that the United States of America has fully accepted Black Americans as men and women, brothers and sisters. Black History matters too.